Diagnostic Studies, Complications and Treatment Results in Children with Cholelithiasis

Copyright: © 2016 Nesrin C, et al. This is an open-access article distributed under the terms of the Creative Commons Attribution License, which permits unrestricted use, distribution, and reproduction in any medium, provided the original author and source are credited.

Objectives: The aim of this present study is to evaluate the characteristics of the child patients with cholelithiasis, underlying predisposing factors, complications, and the responses to ursodeoxycholic acid (UDCA) treatment.
Patients and Methods: 68 child patients applied to the pediatric gastroenterology clinic due to cholelithiasis were examined for approximately 2, 5 years. The data about the patients were collected from the outpatient file records retrospectively average values of the groups were compared using T-test.
Results: The average age of the patients was 7.5 ± 5 years (range: 1 month - 18 years), and 54.4% were male. The most common initial complaints of patients were abdominal pain (58.8%). 8.8% of patients had used ceftriaxone. Hemolytic disease was found in 1 patient (1.5%). A family history existed in 4.4% of the patients. In ultrasonography, hyperechoic image in gallbladder was evaluated as calculus in 82.4% of patients and as sludge in 17.6% of patients. The stone size was measured 6.9 ± 3.6 mm (range 3-15 mm) in average. 2.9% of patients had cholecystitis, 1.5% had acute pancreatitis and 1.5% had chronic pancreatitis. With magnetic resonance cholangiopancreatography, choledochal cyst was detected in 2 patients, pancreas divisium in 1 patient, and duodenal duplication cyst in 1 patient. Ursodeoxycholic acid was started for all patients and continued for an average of 3.7 ± 3.4 months. It was observed that hyperechoic image disappeared in 34.1%, and did not improve in 65.9% of the 44 followed patients. 57.1% of the recovered patients were of those evaluated as sludge. Blood leucocyte and platelet counts of the patients with improved cholelithiasis, in the first application were significantly higher than those unimproved (p < 0.05). One of the patients was operated due to cholecystectomy and another due to duodenal duplication cyst.
Conclusions: Cholelithiasis began to be frequently identified in children. With the diagnosis cholelithiasis, an underlying hemolytic disease can be diagnosed or anatomical defect associated with biliary tract can be detected. Although treatment success with UDCA at various rates has been reported, it is a safe, easy and inexpensive treatment option in children.

Cholelithiasis is increasingly seen in children with the widely use of ultrasonography [1-4]. The prevalence in the society has been reported to be 0.13-1.9% in children and adolescents [1,5,6]. Although the use of antibiotics and hemolytic diseases are reported as the most common causes, it mostly remains idiopathic [1-4]. In the present study, the cases with cholelithiasis have been reviewed, and their different features as well as underlying predisposing factors have been investigated. At the same time, we aimed to assess the response to ursodeoxycholic acid [UDCA] treatment and the factors affecting this response.

Ethical permission was obtained from Yüzüncü Yil University Medical School Clinical Researches Ethics Committee (Approval number: 08.10.2015/06). The study included pediatric patients with cholelithiasis determined by ultrasonography in pediatric gastroenterology clinic between the dates 01/02/2013 and 25/06/2015. From the outpatient file records, together with the general characteristics of the patients retrospectively, height and weight percentiles, reasons for application, gastrointestinal symptoms, routine biochemistry and blood count values, studies about the possible underlying factors, ultrasonography findings, the application time and success rate of ursodeoxycholic acid treatment, total follow-up period of the patients, and data on whether surgery was made were recorded. Patients were given UDCA in the dose of 20 mg/kg/d. The average values of the groups were compared using t-test and the values [p < 0.05] were considered significant. 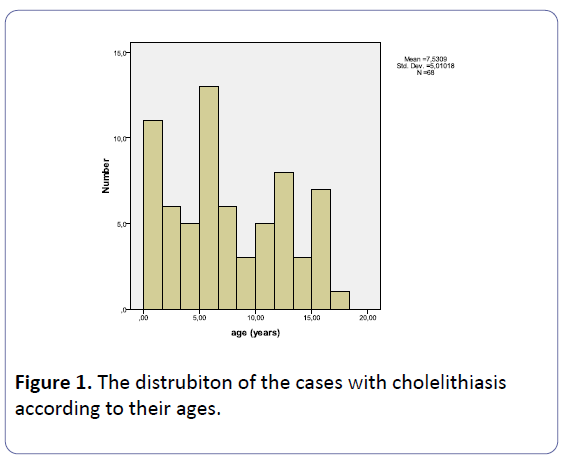 Figure 1: The distrubiton of the cases with cholelithiasis according to their ages.

Table 1: Possible predisposing factors in our cases n=68 with cholelithiasis.

In ultrasonography, hyperechoic image in gallbladder was evaluated as calculus in 82.4% of patients and as sludge in 17.6% of patients. Hyperechoic image was limited in the gallbladder at 92.6% of the patients. The number of stones in those considered as stone was one at 51.7%, and was more than one at 48.3%, the stone size in patients considered as calculus was measured 6.9 ± 3.6 mm (range 3-15 mm). In plain abdominal films, opacity was not observed in any patients. Ultrasonography also revealed hepatomegaly, choledochal cyst and polyps in the gallbladder one each patient. 2 patients had cholecystitis, 1 patient had acute pancreatitis and one patient had chronic pancreatitis. 14 (20.6%) patients were filmed by magnetic resonance cholangiopancreatography (MRCP). Choledochal cyst was detected in 2 patients, pancreas divisium in 1 patient, and duodenal duplication cyst in 1 patient.

Ursodeoxycholic acid was started for all patients and continued for an average of 3.7 ± 3.4 months. It was observed that hyperechoic image disappeared in 34.1%, and did not improve in 65.9% of the 44 followed patients. 57.1% of the recovered patients were of those evaluated as sludge. Blood leucocyte and platelet counts of the patients with improved cholelithiasis, in the first application were significantly higher than those unimproved (Table 2). One of the patients had cholecystectomy. Another case was operated due to chronic pancreatitis table and duodenal duplication cyst.

Gallstones are being frequently detected in children with the common use of ultrasonography and are mostly recognized by ultrasonography performed for different reasons. Symptomatic cases are reported to be approximately 50% [2]. Khoo et al. [7] and Fakirullahoglu et al. [3] reported that it is seen in equal rates in girls, Dooki et al. [8] reported equal rates in males, and Bogue et al. [2] reported equal rates in males and females. In our study, the number of male patients was little more than the number of females. The average age is approximately 7 years as is in our study [1,2]. The reasons of cholelithiasis have not mostly been clarified. However, cholelithiasis may have very different reasons in childhood. Dooki et al. [8] reported the use of ceftriaxone as 27.3% and the incidence of hemolytic disease as 13.6% and reported 30.3% of patients with no predisposing factors. Tannuri et al. [9] and Muller et al. [10] reported hemolytic diseases in approximately 62% of patients being sent for surgery, and Walker et al. [4] reported hemolytic diseases in 15% of the patients.

Silva et al. [11] detected cholelithiasis in a ratio of 40.9% in children with sickle cell disease. Heide et al. [12] reported that 5.9% of obese children had cholelithiasis. They have stated that all these occurred when they lost more than 10% of their present weight when the diet. Similarly, Nunes et al. [13] stated that obese adolescents had cholelithiasis at the rate of 6.1%, and this is related to the rate of weight loss. Fradin et al. [14] have argued that cholelithiasis was a major risk factor for hospital stay in obese patients. Park et al. [15] reported that the prevalence of gallstones is significantly higher in patients with liver cirrhosis, and the related risk factors are diabetes, hypertriglyceridemia and severity of liver cirrhosis. Acalovschi et al. [16] argued that 1/3 of patients with cirrhosis have cholelithiasis, risk of complications due to surgery increases in severe liver disease and therefore medical treatment as much as possible is sound.

Nowadays, ceftriaxone induced gallstones are well known and are referred to as pseudolithiasis. In the use of ceftriaxone, Murata et al. [17] reported the presence of pseudolithiasis at the rate of 18.3%, and Rodríguez Rangel et al. [18] reported 42.5%. Rodríguez Rangel et al. [18] stated that stone size measured as 8 mm, and duration of resolution was 24.1 days, meanly. Koivusalo et al. [19] reported that children with cholesterol stone had low cholesterol absorbers with intact homeostasis of cholesterol metabolism, but children with black pigment stone had deteriorated cholesterol metabolism, and accumulation of cholestanol, campesterol and sitosterol in serum.

As the therapeutic strategies were extremely heterogeneous, conventional treatment for cholelithiasis is removing the gallstone with cholecystectomy. Surgical removal of gallstones in the causes of hemolytic anemia is often necessary. However, conservative approach is preferred in asymptomatic patients developing due to other reasons. For this, UDCA has been used frequently nowadays. UDCA reduces the biliary cholesterol saturation by inhibiting the absorption of cholesterol from intestines. Therefore, it is particularly effective in cholesterol-rich non-calcific stones [20]. UDCA treatment, especially in children with biliary sludge, is an alternative treatment to surgery. There is information available that UDCA shrinks the stones even though it does not completely remove them, prevents the growth and removes the symptoms [1,3,20].

Fakirullahoglu et al. [3] reported the gallstone resolution with UDCA at the rate of 32.3%, excluding patients who received ceftriaxone. In our study, 34% had improvement with UDCA and about half of these patients were evaluated as sludge. Gökçe et al. [21] reported that gallstone resolution with UDCA treatment was detected approximately 29.4% in symptomatic patients and they observed the resolution in 43.8% of children with ceftriaxone-associated gallstone. They proposed that the most important factor associated with gallstone resolution was to be an infant [<2 years of age] at the time of diagnosis. Della Corte et al. [1] applied UDCA treatment to 114 patients and observed dissolution of gallstones in only 8 of the patients. However, they determined symptomatic improvement in 65% of patients with UDCA and proposed that UDCA was ineffective in dissolution of gallstones but it had a positive effect on the symptoms.

Tannuri et al. [9] reported that 25.1% of patients with cholelithiasis have undergone surgeries due to the complications such as cholecystitis, and pancreatitis. Heide et al. [12] reported that cholecystectomy was performed in 22% of those in severely obese children with cholelithiasis. While 2 of our patients had cholecystitis, 1 had acute and 1 had chronic pancreatitis, 1 underwent surgery due to cholecystectomy, and 1 due to duodenal duplication cyst.

As a result, cholelithiasis began to be defined frequently in children and due to its symptoms and discontentment of surgical treatment, UDCA has been widely used. Although treatment success with UDCA at various rates has been reported, it is a safe, easy and inexpensive treatment option in children. With the diagnosis of cholelithiasis, an underlying hemolytic disease can be diagnosed and an anatomical defect associated with biliary tract can be detected. Therefore, the necessary examinations for etiology and advanced imaging with MRCP would be useful.